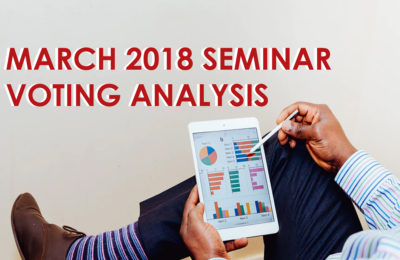 NORMALISATION: COULD THE LONG WAIT BE OVER?

The financial world has waited a long time for a return to normality in the wake of the financial crisis, but there is a growing sense of anticipation that 2018 could mark the re-emergence of more conventional monetary policies.

This was the background to the first Insurance Investment Exchange seminar of the year, held last week in the very traditional surroundings of Skinners’ Hall. Waiting for Godot: Understanding and managing the current environment for insurers was the theme and the focus was on whether the long wait for normalisation could finally be over and how insurers will respond to that.

A popular feature of all Insurance Investment Exchange seminars is the opportunity to capture the views participants through interactive voting and the results revealed that the anticipation of a change in central bank policies is widely anticipated.

WHAT DO YOU EXPECT TO HAVE THE GREATEST IMPACT ON INSURANCE ASSET ALLOCATION GOING FORWARD? 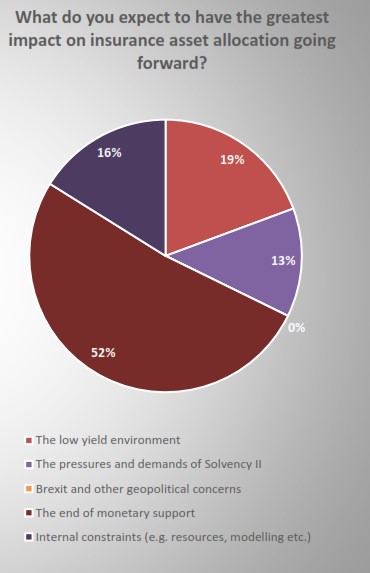 Asked “What do you expect to have the greatest impact on insurance asset allocation going forward?” over half (52%) put the end of monetary support at the top of their list. Last year, the low yield environment was the most consistent concern but that has slipped down the agenda with only 19% citing it as their likely top influence. Brexit and geopolitical issues are not expected to have a significant impact with nobody highlighting them as the major issue.

However, do not expect a dramatic response to the end of monetary support from UK insurers. Asked what percentage of their core fixed income assets they expected to reallocate to other strategies within the next two years, caution was the order of the day.

APPROXIMATELY WHAT PERCENTAGE OF YOUR INSURERS’ CORE FIXED INCOME ASSETS DO YOU EXPECT TO REALLOCATE TO OTHER STRATEGIES WITHIN THE NEXT TWO YEARS? 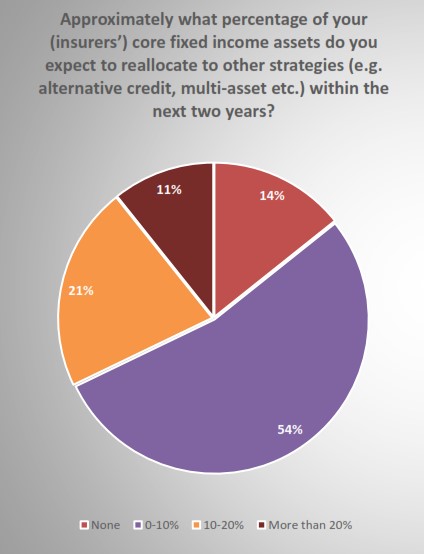 54% said they would only reallocate between 0 and 10% of their portfolio, though almost a third had greater ambitions. The results may also indicate that part of the move from traditional to alternative allocations had also been completed, givent he strides insurers have made into areas such as private debt and real estate debt.

Where would this modest reallocation be most likely to find a new home in the coming years?

IN WHICH AREAS DO YOU EXPECT TO SEE THE GREATEST INCREASE IN ALLOCATIONS IN THE NEXT TWO YEARS? 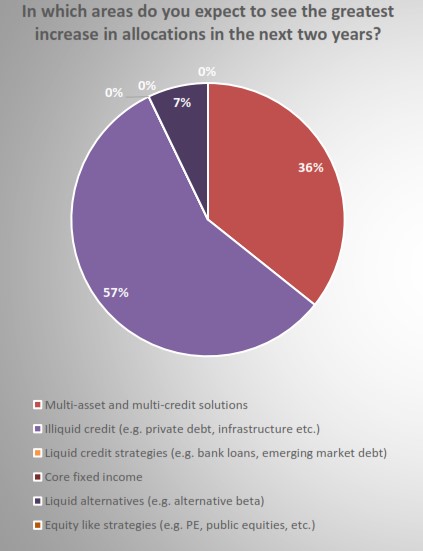 The responses revealed two distinct trends. Illiquid credit has been an asset class that has been gaining interest among insurers for the last few years and that interest shows no sign of retreating. 57% put it as the number one choice. A substantial minority, however, also said they would opt for broader multi-asset and multi-credit solutions.

If insurers are going to venture more into assets such as private debt and infrastructure they will need help. “Where do insurers need most help going forward?” produced an overwhelming vote (57%) for help with developing capital models, risk frameworks and internal ratings for new asset classes – the basic investment architecture of a long-term commitment to these new asset classes.

WHERE DO INSURERS NEED MOST HELP GOING FORWARD? 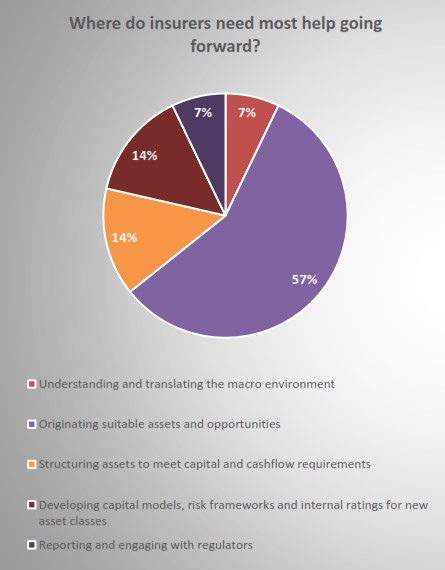 The keynote presentation and panel sessions invited the audience to look at the broader economic and geopolitical trends, and the impact they might have. The audience was asked for its view on where we currently are in the global economic cycle. The answers were telling.

WHERE DO YOU BELIEVE WE ARE IN THE CURRENT ECONOMIC CYCLE GLOBALLY? 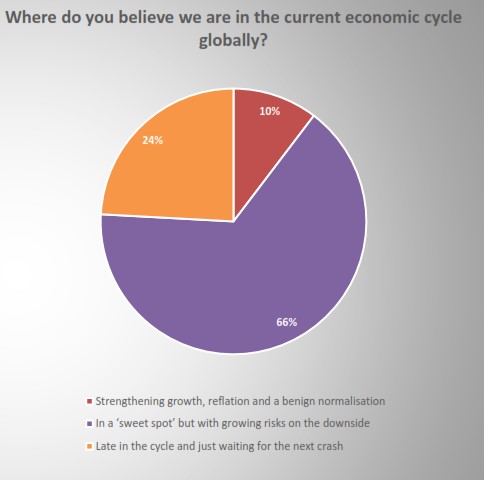 Two-thirds felt we are currently in a ‘sweet spot’ but with growing risks on the downside. A quarter, however, took a distinctly gloomier view of economic prospects saying we are late in the cycle and just waiting for the next crash.

HOW SHOULD INSURERS RESPOND TO THE CURRENT ENVIRONMENT? 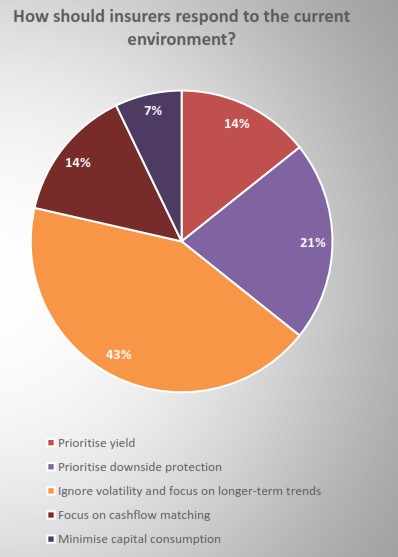 Financial markets have been offering a reminder of what some of those risks might be with a sharp increase in volatility over recent weeks, but insurance CIOs look set to hold their collective nerve in the face of this. 43% said they will ignore volatility and focus on longer-term trends when asked how they would respond to the current environment. A slightly more pessimistic 21% said they would prioritise downside protection.

There will be a report on the key presentations and points of discussion published on the Insurance Investment Exchange website next week.

The next half-day seminar will take place on Tuesday 12 June at Skinners’ Hall. Look out for details of the programme and how to register.