The squeeze will come. The question is how and when?

With UK government borrowing higher than at any time outside of wartime, the Chancellor will have to move to cut the deficit: the question is when and how, says Carl Emmerson, deputy director of the Institute for Fiscal Studies.

Emmerson set out the scale of the challenge facing the government at the recent Insurance Investment Exchange seminar and followed up with an exclusive interview in which he explored the options for reducing the deficit.

The UK economy faces a something of a perfect storm, says Emmerson: “To the extent that the economy doesn’t fully recover, tax revenues will be lower and spending higher than it would have been otherwise. With more spending in a smaller economy therefore taking a greater share of GDP it seems inevitable that taxes must rise”.

Although the cost of borrowing is at an historic all-time low, relying on that over the longer term is a high-risk strategy, warns Emmerson: “What if growth doesn’t recover and interest rates start to rise?”. 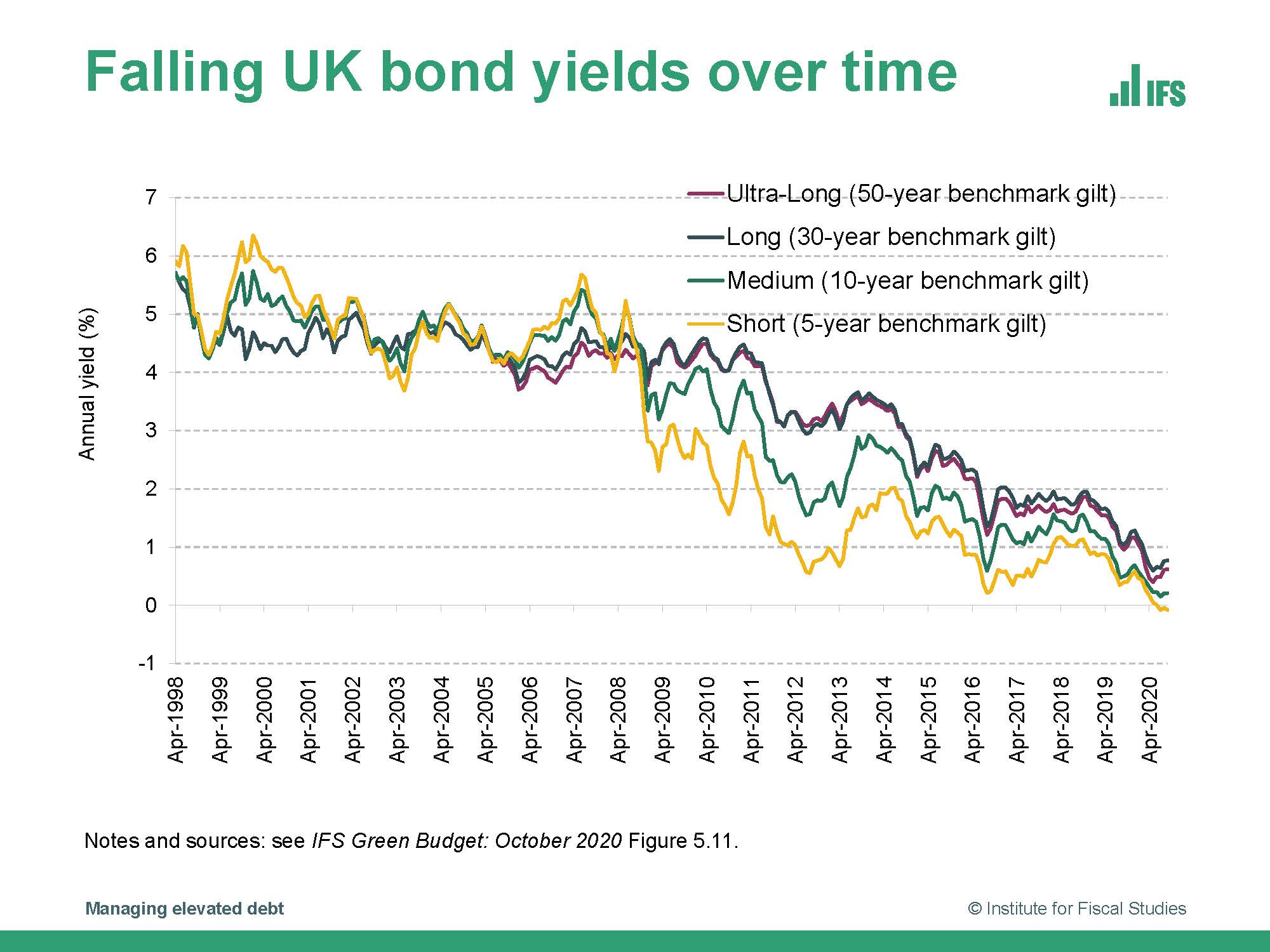 The slashing of interest rates since the global crash of 2009-10 has hugely depressed bond yields (see graph), something insurance company CIOs would be glad to see reversed so what might be bad news for the Chancellor could be good news for insurers.

The focus on tax rises as the most likely way out of the deficit challenge is partially a consequence of the post-2010 deficit reduction being achieved through cuts in borrowing: “That trick gets harder to repeat”, he says.

With commitments to raise spending on the NHS and defence in particular, the government has very few places where it can look for cuts in public expenditure, although it has already identified the overseas aid budget as one source.

With the pandemic having already forced that government to break some of its manifesto pledges, it probably has a freer hand than it might have done to look for tax rises.

Income tax is almost certainly ruled out, but there could be increases in National Insurance, Value Added Tax and Capital Gains Tax. Emmerson also floated the possibility of increases in Council Tax with the current bands based on property valuations in 1991. Corporation Tax could be another target with a “rate low by G7 and OECD standards”.

Emmerson also suggested that there was considerable scope for reforming the overall tax system.

“A Chancellor looking to improve the tax system could do a lot that would raise money and make the system more coherent”.

One challenge the Chancellor will have to face up to is the need to overhaul how money is raised from motorists. With the government committed to promoting the use of electric vehicles the huge amount raised from Fuel Duty is set to plummet. That will have to be replaced and the obvious route is road charging, which has proved controversial but which makes sense according to Emmerson as it also addresses the problems caused by congestion which have significant economic costs.

“Politically it would be a smart move to go early as you have something to give away. You could reduce Fuel Duty as you introduce road charging”.

As the Brexit negotiations face yet another last-ditch opportunity to conclude a deal, the prospects for a meaningful deal have receded further.

“Even if we get a deal it is likely to be a very thin deal that will see non-tariff barriers to trade. That will mean less trade in some sectors and overtime you will see us grow less fast than we would have done otherwise”.

Even with vaccines arriving, the overhang from the virus will have significant “scarring effects” on the economy over the next five years, especially through rising youth unemployment and changes in the world of work which will damage city centre economies. The latter could see economic growth in the suburbs and provincial towns as people work from home and spend more time there but this will not happen quickly.

“There will be changes in how the economy is organised but all of that takes time as it involves the movement of capital and labour”, say Emmerson.